The Company is registered as a legal entity in South Africa.

To develop a world class big 5 game reserve and become a flagship conservation economy case study whilst delivering solid returns for our local and international investors and shareholders.

Loziba  (Pty) ltd is a company established to develop a sustainable conservation economy conservancy, working with our partners, investors and communities. Our primary mission is to create a 30,000- 40 000 Ha game reserve and  sanctuary for iconic species, including Black Rhino, White Rhino and Elephant  by 2027.

To invest in Loziba (Pty)Ltd , follow the link below

CWC Africa Projects (Pty) Ltd, a company established in South Africa, is Loziba(Pty)Ltd's appointed project management entity. The company offers its services to NPO's, communities, private companies and governments around Africa, which include the following: –

Setting up of Company and community legal entity structures –

To donate to Loziba Wildlife Reserve follow the link below

The Reserve is situated In the heart of Zululand, Kwazulu Natal, South Africa

The proposed Reserve is made up of a number of existing farms that have been targeted for acquisition, as well as various community owned land.

The Maputaland-Pondoland-Albany Hotspot (MPA) is a biodiversity hotspot, a biogeographic region with significant levels of biodiversity. It is situated near the south-eastern coast of Africa, occupying an area between the Great Escarpment and the Indian Ocean covering parts of South Africa, Swaziland and Mozambique. Ecologically, the area is characterised by a broad range of habitats; forest covered dunes, river and wetland systems, lakes, shoreline, savannah grassland, mountains and mistbelts. It is home to the Southern White Rhino, brought back from extinction by Dr Ian Player, and his colleagues during the 1960’s during Operation Rhino; as well as elephant and the critically endangered Black Rhino.

High poverty, unemployment and state neglect of deep rural communities means that land under/earmarked for conservation is threatened by marginal agriculture, cattle and goat farming. These activities encroach on habitat and degrade soil and land (overgrazing).

Another real threat is poaching, which is heightened in a period of economic contraction.

Loziba CWC (Pty) ltd has targeted a key strategic conservation region in the Zululand and Umkhanyakude Districts of Northern KwaZulu-Natal (KZN) in South Africa. In total, the region is 2,7 Million hectares in extent, and comprises a diversity of landscapes. This area has been identified as a Biodiversity Economy Node, centred around a concentration of game and wildlife reserves, including Africa’s oldest park, Hluhluwe-Imfolozi Park (HIP), and Isimangaliso Wetland Park, I(WP) World Heritage Site.

Both HIP and IWP are state managed protected areas, home to iconic African wildlife and notably, the critically endangered black rhino, threatened white rhino and elephant, all under direct threat of poaching.

Within this area are 34 reserves that are members of the Project Rhino collaborative. The reserves are essentially wildlife enclaves surrounded by rural communities experiencing high unemployment and socio-economic stress.

The Loziba Wildlife Reserve is an extremely viable project situated in the heart of the Thaka Valley CWC, as a strategic national imperative for saving the endangered Black and Southern White rhino, and other iconic species.

The land is located south of the Black Imfolozi River and the reserve will generate meaningful benefits to landowners and surrounding communities whilst conserving valuable cultural and natural heritage.

The phase 1 land acquisition, planning and infrastructure cost to establish the Loziba Wildlife Reserve will be in the region of R100m, a significant investment into wilderness conservation and tourism for the region.

Phase 2 will be the development of approximately 10 lodges within the reserve. These will be made available to investors and operators on a lease or sale basis.

Why is acquisition of the land the best solution for Loziba CWC (Pty) Ltd?

By having farm ownership, Loziba (Pty) Ltd will increase its legitimacy in engaging with the communities whilst providing suitable long term security of tenure for investors who wish to invest in the project or develop a lodge.

Beyers Coetzee, an honorary founding member of CWC PAfrica, was tragically killed on the 18th February 2020 attempting to keep the herd from moving onto community land, and was trampled to death by two of the younger bulls in the herd.

Famous artist Andries Botha, created this beautiful memorial to Beyers that stands on the land he loved – Loziba. 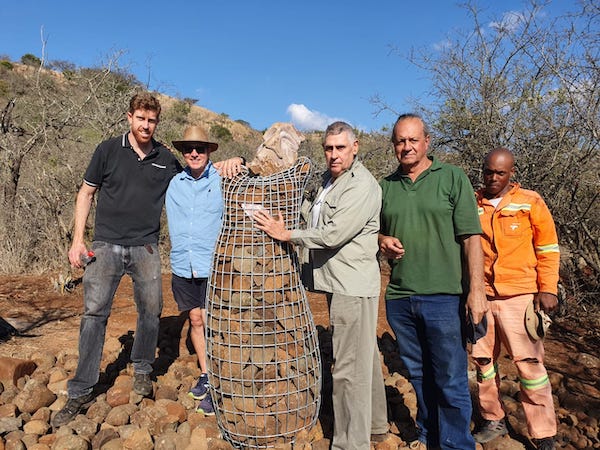 GRANT FOWLDS
TECHNICAL OPERATIONS DIRECTOR
Grant is a passionate conservationist, a connector and communicator with a unique ability to bring people together. His fluency in both Zulu and Xhosa are a critical tool in bringing this project to fruition. He is a best selling author, and his book 'Saving the Last Rhinos' is opening doors and connecting people from all over the planet with this project and programme for rangeland expansion. Grant has an empathy for communities and the conservation sector he serves that is evident in tireless campaigning. Grant was part of a small team that carried out a similar and very successful project in the Eastern Cape called Amakala. The land was once various farms that have been amalgamated and returned to their natural bushveld state, populated with game species indigenous to the area.
Visit Amakala
JAMES ARNOTT
PROJECT DIRECTOR
James’ early career revolved around FMCG marketing management, working with corporates such as Unilever and Robertson's Spices, based in Durban. He moved into property full time in 2003 and has subsequently been involved with a number of reputable development and construction businesses in ownership and various roles and has completed a number of successful property developments in South Africa.